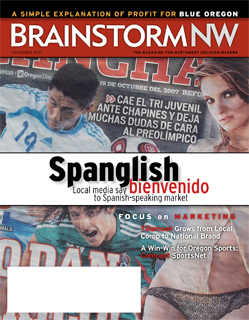 On the one hand: Negative sentiment about illegal immigration is growing and polls show that folks on both sides of the political aisle now believe it’s a serious problem.

Day laborers in the Portland area have found themselves taunted by self-appointed immigration enforcers intent on disrupting the drive-by illegal hiring process on the streets.

Bona fide federal immigration raids nabbed 167 workers in a high-profile raid of the Fresh Del Monte plant in North Portland in June and 12 more in the Medford area in August. Increased enforcement efforts have led to smaller-scale, unpublicized arrest runs in both Oregon and Washington, immigration officials say.

In October, Oregon’s Department of Motor Vehicles stepped up scrutiny of identity documentation in an effort to reduce fraud, culling what they described as questionable documents most often in Latino applications, according to the Oregonian newspaper.

Certainly, the worst of times.

On the other hand, it is the best of times for Spanish speakers trying to get along in the Northwest, where media have rolled out the bienvenido mat in a big way.


Several Spanish-language radio stations have launched in the Northwest in recent years. Portland alone is now home to four, each offering a different format: one for contemporary programming, one for oldies, one regional broadcast, and one for news only. Spanish-language stations also operate in Woodburn, Junction City and Redmond. Perhaps the newest is KXOR-AM Eugene, which provides 24-7 Spanish-language programming, allowing the Latino community to hear about local news and events in their own language.

For each of the past three years, according to the Register-Guard newspaper, KXOR-AM has sponsored the huge annual Cinco De Mayo celebration in Springfield, an event that features soccer, Hispanic music and amusement park rides.

Newspapers are the latest welcoming committee to arrive on scene, but they have done so in spectacular fashion.

Both the Statesman Journal in Salem and the Spokesman-Review in Spokane have made it a point of pride to provide Spanish-language coverage of several news events in their main news sections in recent years.

Steve Smith, editor of the Spokesman-Review, last year published Spanish-language coverage of the visit of Mexican President Vicente Fox to Yakima. The article was not translated into English anywhere in the newspaper.

The idea, he said, was to reach Spanish-language residents who were part of the newspaper’s coverage area with news that would specifically interest them.


The result was reader fury.
Reader Ann Engelbrecht emailed the Spokesman to say she was “shocked and dismayed to find this morning’s edition contained a story written in Spanish. We too will cancel our supscription if this happens again. Since we’re paying for this paper, we should be able to read WHATEVER story we want without having a ‘language problem.’ This is America. Our language is ENGLISH. Duh!!”
Another reader pointed out that “newspapers in Mexico, DO NOT print their papers in English. They are proud of their language, and the people in Mexico speak Spanish. That is their national language. English is our national language — I thought!”

The Spokesman’s senior editor, Carla Savalli, initially said “logistical problems” and lack of time prevented the newspaper from running an English translation of the story, but Smith was unapologetic in his response to his readers. “I understand why some readers are upset by our decision to provide Spanish-language coverage of the Vicente Fox visit. However, it was an easy decision for us. Journalists provide information when and where it is needed and in whatever form is necessary. There is nothing in the ‘rule book’ that says newspapers must be English-only, Russian-only or Sanskrit-only.”

In an interview with BrainstormNW magazine, Smith said he considered reader reaction to the Spanish-language article “an overt racist response. This is the usual ‘We’re an English-language country…If they can’t read English, they should just go home.’”

Regarding those who said they expected to get an English-language paper since it’s what they paid for, Smith said, “That just pisses me off. I’m a second-generation American — my family comes from Russia and Poland: America has always been a nation of immigrants.”

Smith says he has every intention of running more Spanish articles in the Spokesman in the near future, regardless of reaction from the newspaper’s American readers.“We had done it several times when I was editor (of the Statesman Journal in Salem) and we got virtually the same reaction. In fact, this was probably the fourth time we’ve done this in Spokane.”

But he may — next time — include an English translation. “From a customer standpoint, it’s probably a smart thing to do, but as a fundamental journalistic principle, we don’t need to. The fact is, immigrants are here to stay and people had better get over it.”


At the Oregonian, coverage of Hispanic issues has been stepped up in the past year. Much of the coverage, including a story hailing the first Latin American Film Festival, a feature on Oaxacan radio, festivities on Mexican Independence Day, and a spotlight on businesses that cater successfully to the Latino population, are supplied by a Latina reporter. The same reporter covers immigration issues, bringing the stories of illegal immigrants suffering as a result of immigration raids.

In September, the effort blossomed into a full-fledged Oregonian-spawned Spanish-language spin-off called Cancha, which means “field.” The 32-page tabloid-sized newspaper is produced in cooperation with Grupo Reforma, a Mexican news service that provides a regular flow of news on Mexican celebrities and sports stars that is supplemented with local news and advertisements provided by the Oregonian.

It’s offered free in news boxes all over the Portland metro area.

The publication hit the streets, not coincidentally, on Mexican Independence Day, Sept. 16.

Bradley Harmon, marketing manager for the Oregonian, said the publication is the newspaper’s attempt to invest in “a growing market” and to expand coverage of issues to be inclusive to the needs of a more diverse community.

While it won’t — by itself — resolve the Oregonian’s continued decline in circulation, it is part of a multi-layered marketing program designed to appeal to niche groups, Harmon says. “The things we’re doing differently are not just Cancha. Our footprint is different.”

Which is to say, the Oregonian is now operating several niche publications. One, Mix magazine, seeks to cover the Portland foodie scene; Ultimate Northwest targets the $150,000-plus income readership; Explore the Pearl covers, well, the Pearl’s retail shops and lifestyle; DriveTime Illustrated is for auto buffs.

While the newspaper could have launched Cancha as a bilingual publication instead of all-Spanish, Harmon says the tabloid’s intended audience, first generation immigrants, is Spanish-speaking only.

“We sized up the market and found that the majority of the first generation market is young Latino men who are not bilingual.”

The focus on young men may explain the cover of the publication, which features pictures of male sports icons and plenty of women in revealing clothing. “It’s very flashy, very colorful. We’re very excited to have a product that speaks to them,” Harmon says.

Jorge Navarro, executive director of Centro Latino Americano, a Eugene-based nonprofit agency that helps immigrants cope with American life, says Spanish-language publications are an effective way to preserve heritage. “I’ve always had the belief that this country has the chance to be truly diverse, multi-language and multi-cultural. We always talk about a melting pot that never existed. We all carry stuff from our past and bring it forward,” he says. “I refer to it as the salad bowl theory of diversity. It’s where a tomato stays a tomato and an onion stays an onion and — lettuce and all — that’s who America is: a big salad bowl. And it’s awesome. It would be pretty nasty if it were all onions.”

There’s also a practical side to all-Spanish media, Navarro says. “There is an entry level for everything. I like the idea of bilingual, but it’s expensive and one hell of a project. And from what I know about news organizations, you’re flying by the seat of your pants most of the time. Editors have their hands full.”

Clara Padilla-Andrews can agree with that. As publisher of Portland’s bilingual El Hispanic News and president of the National Association of Hispanic Publications, Padilla-Andrews knows what it is to have your hands full and your newspaper’s wallet empty.

She chafes at the hubbub around Cancha, because El Hispanic news has been on the same mission since 1981 with little fanfare despite its loyal readership. “We have been part of the community forever. This is not something new to us. We’ve continually been writing about what’s going on in the Latino community, profiling the good things the Latino community contributes to this great state … It’s not something we decided to do a few months ago because there might be opportunity for some dollars.”

Tim Gleason, dean of the University of Oregon Journalism School, says mainstream newspapers are all looking for new revenue streams and marketing niche publications are a means to that end. “It’s fair to say that the old concept of the metro that served everyone and reached into every home is certainly in decline,” he says. “Is that bad? Well, in some ways it is — in the sense of having a common ground. On the other hand, there was only a brief period of time in American journalistic history where that concept was in ascendance. For most of history, multiple publications served multiple populations.”

Jim Ludwick, president of Oregonians for Immigration Reform, says Oregon’s media are doing more than simply accommodating Spanish speakers by providing news in their language. He believes they are spinning the news to favor the case of illegal Latinos.

One of Ludwick’s examples is what he describes as “an otherwise factual article” on the number of illegal immigrants in Oregon jails that was topped with an Oregonian headline stating that illegals “Aren’t filling jails” as some claim. The News-Register of McMinnville printed the same story and gave it an entirely opposite headline: “More Than 1,000 Illegal Immigrants in Prisons. Anti-illegal Immigration Activists Say Stats Underestimate the Problem.”

Further, Ludwick says, “For a number of years, the media have done front-page stories profiling some sympathetic illegal immigrant — usually female — about how she’s overcome obstacles. The idea is she’s someone you might want as a neighbor.”

The media’s growing investment in Spanish-language customers could backfire, some say.

Jeff Kropf, former Oregon legislator and talk show host on KUIK-AM and KXL Newsradio in Portland, says Oregon media are sending the wrong message to immigrants. “They’re sending the message that the media are facilitating foreign nationals — legal or illegal — who have no desire or reason to assimilate into American culture, and they’re making it easier for them to come here and prosper but not assimilate.”

Kropf believes it’s the same philosophy that has caused a backlash in Europe, and in France especially, where proposals to restrict immigration, guard borders, and require basic understanding of French language and culture are coming too late to stem the tide of rioting gangs of immigrant Muslim youth.

“The arrogance of some in media who say, ‘We’re it and you don’t have anywhere to go,’ ignores the reality of the Internet, the blogosphere and talk radio,” Kropf says. “It’s like politics: If you lose touch with your base, if you choose to provide news stories to someone other than your base of English-speaking people who are paying to subscribe, they’ll find someone else to represent them.”

Ludwick says it’s just not in style to be a proud American anymore.

“One of the things that made the U.S. such a great place was the melting pot. People who came here wanted to become Americans, wanted to learn English. Now, it’s just not the vogue thing.”